The common practice of administering Vitamin K for new-born babies at birth may be the first time that you will need to think about an injection for your baby. What is wrong with a vitamin you may ask? 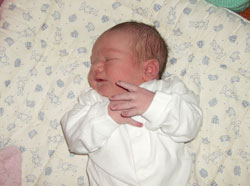 Below is a discussion that we had about this decision on our Yahoo Group which will provide a few things to look into for yourself and also give you an idea of how the Yahoo group works.

“What do the group think about Vitamin K for newborns?”

Hi Erin, I too am pregnant, and seeing your request for info made me think about this issue as well, as I was very ill equipped with information for both previous births, and both babies were given injection. I found an interesting article on a website www.aims.org.uk, I searched 'vitamin k' in the search box, and the first article to appear on the list is by a midwife called Sara Wickham, and is called 'Vitamin K - an alternative perspective', I would recommend a read.

I haven't managed to find anywhere, though, that details what else is in the vit k injection, as I imagine there must be some chemicals/liquid in which the vitamin k is suspended, so if anyone has any knowledge of this, I'd be interested.From my memory you are right to be armed with good information and a solid view before the birth, as there is a lot of pressure to have the injection, Sarah

I remember thinking at the time - it's just a vitamin - but now I know it was synthetic - and in my 'just had a baby' stupidity - did not ask to read the 'insert'. Google 'Ingredients of vitamin K injection'. I think that injecting new born babies means that they have a higher risk of developing Leukaemia. Elaine

I faced the same dilemma when my baby boy was born. My doula told me the following information which made me decide not to do it. I'm so glad I didn't give it to him. She told me how giving vitamin k had come about. It was originally given to baby boys who were to be circumcised if they were Jewish, in the first 8 days after birth (for religious reasons) so that they wouldn't bleed to death (vit k helps with blood clotting, I think). Then it was given to all boys to be on the safe side in case they would be circumcised, and to keep procedures simpler. Then to make it even easier for hospitals they decided to give it to boys and girls. Apparently its also for babies that have had a traumatic birth and there's been some bleeding. Lucy
Just studied this for my naturopathy course tomorrow. Vit K is required for blood clotting. In newborns, there are rare cases of haemorrhage from the umbilical cord and intestinal mucous membranes when the vit K supplied by mother has been used up before birth and the intestinal bacteria needed for its production in the infant’s bowel are not yet established. This is most likely to occur with babies who are premature.The NCT and AIMS produce leaflets on this matter, maybe you can consult those for pros and cons, I have decided against it for both children (with my first I wasn’t even asked, it wasn’t a concern back then). I decided that if I had a normal (non-traumatic) birth at term it wasn’t needed. In such situations, I always look at the likelihood of something like this occurring and most often it’s less than being run over by a bus when you cross the street… and you wouldn’t ever think twice about doing that, right? “Vitamin K: A flaw in the blueprint?” from the Midwifery Digest (MIDIRS, Sept. 2001) – is excellent. Johanna x

I looked in to this a lot before I had my son. Vitamin K is found naturally in plant and animal sources and is made by the intestinal bacteria, but as the digestive tracts of newborns are usually sterile to start with they do not have the ability to make it instantly. However, the statistics are that only one in 10 thousand babies would have a problem with haemorrhaging, but because there is this small chance it has become a routine procedure as the orthodox doctors would like to cover themselves.
Colostrum and milk are naturally rich in Vitamin K, and there are foods rich in it which you can eat to ensure that your milk contains it, such as most green plants, dark leafy greens, blackstrap molasses and egg yolks.

Also there is much more likely to be toxic side effects if synthetic vitamin K is used, as natural sources are absorbed or eliminated easily where as the synthetic type can build up in the blood. I decided not to have Vitamin K given to my son. I had a home birth, but at 48 hours old a doctor suspected an umbilical infection and so they wanted to take a blood sample from him to test. I was put under a lot of pressure at the hospital to let them give him vitamin K especially as they were going to take blood from him, but I still refused.They ended up having to take about 8 samples altogether as every time they took it, the blood had clotted before they had a chance to test it. Eventually they managed to test it quickly enough before it clotted again. This proved to me that mother nature knows what she’s doing. Elizabeth

Vitamin K is given because apparently because, there is a one in 10,000 of the newborn having hemorrhagic disease (bleeding in the brain) if there is a deficiency of Vit k. The chances of stroke after a c section are 1 in 5000.Our view was give it orally. The nurse said the girls might spit it out, I said fine then she does not want to have it. Nurse gets paediatrician and tells me this 1 in 10,000 risk figure,I ask is that a significant risk she says yes. I go this is outrageous we were told there was only a 1 in 5,000 risk of stroke with Janett’s C section ( twins transverse and breech) which was no risk. I want to complain. The paediatrician starts to back track on the risk related to 1 in ten thousand and gets a nurse to calm me down, failing to notice the grin on my face as she ran off. The girls were given Vitamin K orally and spit most of it out. Moral of the story, don’t get into complicated debates with health professionals. They will patronise you and they are the “experts” on hemorrhagic disease.It is surely a miracle the human species survived pre vit k injections. Richard, Chiropractor
We gave vitamin K orally for all 3 of our daughters - 2 born at home. We decided it was an acceptable compromise as if the baby needed some vitamin K (which of course it may not) it could absorb it naturally through the intestine , a bit like giving an older child a vitamin supplement. Giving it as an injection seemed to be unnecessary and I remember reading of possible links with childhood leukaemia being seen in one study in Bristol - I can't remember details though. We had to get a prescription for the oral Vit K from our GP and pick it up from the pharmacy ourselves, and as I remember gave it ourselves, the midwife may have given one of the doses. The doses were at 24 hours, 7 days and 28 days. I think we may not have bothered with the last one. Looking at some online debates between midwives it seems some units only give oral vitamin K, others injectable and many midwives question whether it is necessary if a baby is breastfed frequently by a well nourished mother (some take Vit K supplements in the few weeks before birth) in the first few days of life so they get lots of colostrum which contains more vitamin K than breastmilk.Liz, GP

One can use Arnica (trauma remedy)..and take probiotics in your final trimester...it is the good bacteria in the gut that produce decent amounts of Vitamin K.....well that's what I did with my the birth of both my boys and the first birth was very traumatic. Khush, Nutritionist PhD

I don't agree with vitamin K unless the birth was forceps/suction cap or there's some type of head injury, for the following reasons:

1. All newborns levels of vitamin K are similar. If they were low as doctor's suggest, then not all babies would have a similar level. The fact that most do suggests that this 'low' level is actually normal in newborns.

2. Vitamin K used to only be indicated in cases of forceps birth and difficult delivery. Now they blanket medicate every baby. For most babies there is no medical need.

3. There are some brands of vitamin K which contain animal fat and I'm vegetarian. Vitamin K also contains other ingredients which are not good for a baby.

4. The manufacturer's state that vitamin K can cause anaphylactic shock, so it obviously isn't 'just a vitamin'.

5. Babies who are breast fed IMMEDIATELY after the birth do not bleed. Studies suggest that delaying the first breast feed after birth, contributes to brain bleeding.

6. Doctor's policy on vitamin K undermines mother and discourages breastfeeding, because doctor's say that breast milk does not contain enough vitamin K and is not good enough. That is not true, mother's milk contains everything a baby needs at the levels he needs it at. I cannot support any policy which provides negative statements on breast feeding.

7. The vitamin K injection has been linked with an increase in childhood cancer.

8. The vitamin K injection is an act of violence against the newborn. I do not want my baby's first experience of the world to be pain. Injections should only be given where medically vital, eg, for a pre-term infant who would die without medical intervention, or IV antibiotics for a baby with meningitis.If there was a medically indicated reason for vitamin K, I would give the oral version.

9. Studies suggest that vitamin K supplementation causes jaundice which then leads to light therapy treatment which also carries risks. This suggests that the vitamin K shot or drops is actually an 'overdose' for the baby and there is probably a good reason why newborns only have a little

vitamin K.
10. Vitamin K is got from leafy green vegetables and if mum eats lots of them during pregnancy, she decreases her baby's risk of bleeding. Mums who take antibiotics during pregnancy or labour put their baby at increased risk of a brain bleed so if you are pregnant you should avoid antibiotics except where vital.

I hope this helps. Joanna

Health disclaimer. Every care has been taken when writing this website to ensure the accuracy of the material provided. However the authors cannot accept responsibility for any damage or harm caused by any advice or information given in this website. The decision is yours. If you have any doubts about vaccinations, you should consult a medically qualified practitioner.