Nursing your child through a fever is an anxious time for all parents. The displaced concern is that antipyretics (such as) paracetamol may prevent febrile convulsions following a high temperature. 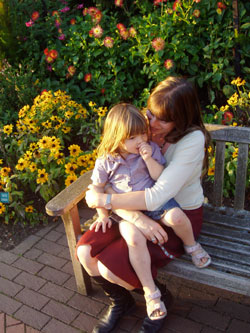 The misconception is that bringing down a temperature artificially is a safe option in the UK. But there is association between paracetamol use in infancy and childhood, and risk of asthma, rhinoconjunctivitis, and eczema in children.

Other countries, Holland for example, view fever in a healthy perspective. Have a look at Fever articles Here
Signs to watch for which may need medical advice:

Fever of more than 3 days (infection may be present)

Fever which can't be bought down naturally (infection may be present)

Fever more than 41.5C - extremely rare but fever can be harmful

Fever due to sun stroke.

Fever in patients with cardiovascular or neurological disorders.

If you suspect meningitis or septicaemia call 999

So how could we adopt a natural approach for Fever?

The NICE (National Institute of Clinical Excellence) 'Guidelines on Management of feverish illness in children younger than 5 years' stated;

1. do not routinely use antipyretic agents with the sole aim of reducing fever in children who are otherwise well

2. do not routinely administer paracetamol and ibuprofen either in combination or alternately

3. antipyretic agents do not prevent febrile convulsions and should not be used specifically for this purpose.

So even the scientific evidence is now showing what many of us have always suspected or known!

Being a trained doctor myself, I suspect that it may be many months or years before doctors and health visitors take these guidelines on board!

Views on fever from some Arnica Practitioners:

1) Fever is very important and we should welcome it, rather than be scared. Many 'bugs' need a temperature of 38.5–39 C to be successfully fought off, and so bringing the fever down too early can have a detrimental effect on the body doing what it does best: healing itself!

2) The body knows what to do - if the fever is high, your child will get sleepy: sleeping/resting is actually the best medicine.

3) I notice that many people use homeopathy as a substitute for conventional medicine in fever but finding the right remedy is complex and such remedies should not be given just for temperature.

4) Convulsions only occur when the fever is rising rapidly, and some children have convulsions with a low temperature. Studies have shown that there are no long risks with convulsions. However, for convulsions in babies or more than one convulsion after the MMR (convulsion is a listed side effect of the MMR) or when convulsions / fits occur when there is no association with fever, see a doctor.

5) Watch what your child is eating. (And usually food is neither wanted nor needed.) Avoid milk or other dairy products, fruit is OK. Ensure that they drink plenty - unsweetened tea, fresh orange juice, water with a squeeze of lemon. Avoid sugar to support the immune system, especially if it may be fighting infection.

One might argue why try and bring the temperature down? Bacteria and Virus cannot easily survive high temperature, by artificially lowering the temperature you may be allowing the strongest bacteria to survive in the child for the opportunist infection to reoccur when the host conditions are right again.

When our kids have high temp, we have always let the temperature run its course, according to Dr Mendelsohn - 3 days max. When the core temp of the body is elevated, the body tries to dissipate the heat through the periphery, head, feet and hands. This process is regulated by the hypothalamus which controls and integrates the function of the autonomic nervous system and the endocrine system.

So by heating the feet, the message going back to the hypothalamus is the body is over heating and is having difficulty getting rid of heat. Hot blood arrives in the feet, and finds them very hot from the water. In fact the blood is leaving the feet hotter than when it arrived thermo receptors fire messages back to the hypothalamus and it reset the brain 'thermostat'. Cold sponging worked in the opposite way making the sensor think the body was cold causing the thermostat to raise core temp.

“Fever is the body's way of fighting bacteria and virus,

usually it's the most effective method for doing it.”

Every child is different when it comes to temperature. It is always best to take your child's temperature when they are well so that the difference can be compared rather than feeling that the temperature should be bought down at a particular universal point. The symptoms are more revealing than just a temperature. I would consider keeping a child off school for the day after a fever or illness, even if they appear well, as post recovery is important.

Sleep is also a great healer, so if making the child more comfortable by bringing the temperature down a little (naturally if possible), then consider sleep highly in the decision on dealing with fever. Loosen clothes and open a window.

Tell your child what is happening and what you are doing.
Be positive and calm with your baby or child when they are ill. If you show worry and fear then they will pick up your anxiety which will hinder their recovery. Also if you panic then you cannot think clearly which may hinder your knowledge and intuition. Phone a friend for support and advice if you need to or phone NHS Direct

When a body has dealt with a virus / pathogen previously it will recognize it when it meets it again meaning that it will activate its immune system and defend itself very quickly.

Often a child will have a raised temperature for a while but nothing will develop and this can mean that the body has successfully responded.

The body begins to immobilize its immune system as the temperature rises. But at what temperature is this optimal? And how long does the body need to remain hot, especially considering that each child in each situation will behave differently? Some think that this immobilization happens very quickly and that bringing the temperature down does not interfere with this process. GPs had even advocated doubling the dosage of medicines with alternating Calpol and Nurofen, totaling 6-8 doses in 24 hours - however NICE guidelines now warn against this.

Note that ibrubofen is used for neonates and is considered safer than Calpol. However, these medicines have warnings relating to the stomach and the liver respectively.

In fact Paracetamol overdose can prove fatal, and there is only a narrow margin between safe and toxic levels. (NHS Nurse Bulletin 1999)

Antipyretics prolong illness in patients with Influenza A.... The duration of illness was significantly prolonged from 5 days(without) to 8 1/2 days (with). Pharmacotherapy 2000, 20: 417-422)

Meningococcal Disease: "use of analgesics were associated with disease.....we cannot exclude the possibility that acetaminophen use itself is a risk factor for meningococcal disease" (Ped Infec Dis, Oct 2000, Vol 19, No 10, 983-990)

Fever is an important indicator of disease and should not be routinely suppressed by antipyretics. Fever may actually benefit the host defence mechanism. Fever is short-lived and causes only minor discomfort. Routine antipyretic therapy should be avoided but may be necessary in individual

The data suggests that frequent administration of antipyretics to children with infectious disease may lead to a worsening of their illness." (Acta Paed. Jpn 1994 Aug;36 (4) 375-378)

“But before you reach for this sticky pink cocktail dished out by doctors and parents as a cure-all for children, think again..."

From The Ecologist - Behind the Label: Calpol

Calpol of course doesn't just contain paracetamol. It is a veritable cocktail of sweeteners, flavourings, preservatives and colourants to make the product appealing and palatable to infants. These additives include strawberry 'flavouring' and carmoisine (E122- suspected carcinogen, banned in Austria, Japan, Norway, Sweden and the US) to produce its pink colour.